Remember when I posted about a Taiwanese American literary anthology seeking submissions?  The anthology is titled Chrysanthemum: Voices of the Taiwanese Diaspora and is available for pre-order only through Kickstarter. 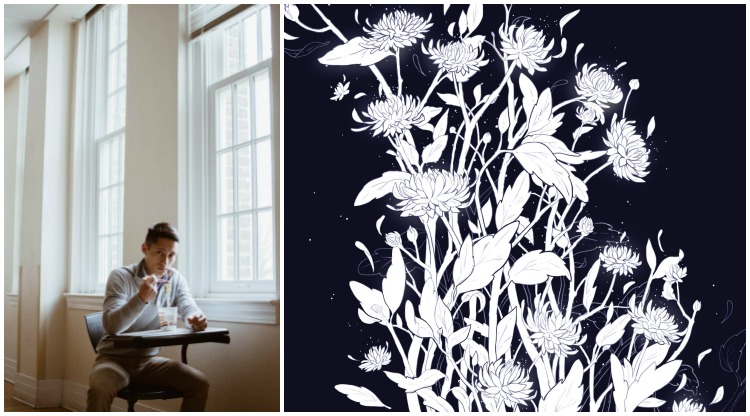 Editor Andrea Chu says that the team received over 80 works. “We have selected over 25 pieces that touch on the liminality of the Taiwanese American experience from mostly emerging creators,” says Chu.

A $15 donation gets you a copy of Chrysanthemum shipped to you.

The Kickstarter campaign ends Monday, October 30. Chu says they are not sure whether the books will be available for sale after the Kickstarter period.

I spoke with Ezra Baeli-Wang, one of the young writers featured in Chrysanthemum.

HapaMama: Tell me a little bit about yourself: Where did you grow up, go to college, where do you now live?

Ezra Baeli-Wang: I grew up in Hillsborough, a suburb in central New Jersey–lived in the same neighborhood in the same house until I was seventeen and left for college.  I attended the University of North Carolina at Chapel Hill, and studied Peace, War, and Defense, and Chinese, and minored in Creative Writing.  I’m living in Raleigh, North Carolina now.

HM: How do you identify yourself racially and/or ethnically?

EBW: I identify as mixed-race or biracial.  It’s interesting because depending on the time of year (how much sun I’ve gotten), where I am in the world, and what language I’m speaking, I’ve been mistaken for Native American, Hawaiian, Spanish, Filipino, or even fully-white or fully-Taiwanese.

HM: Tell me a little bit about your writing and how you got started…

EBW: I started writing at a pretty young age.  My mother spent some time as an adjunct English professor, and was a published poet herself, so I credit her for my early exposure to, and appreciation of, language.  As a child I mostly journaled, and had one longer-term fantasy adventure “novel” I worked on for quite a while–stuff I would be mortified to have my name on now.  But when my mom moved out to Albuquerque after my parents divorced, I had the opportunity to attend a number of poetry readings that left lasting impressions on me.

The poetry scene in Albuquerque was a vibrant, powerful, exciting place for a thirteen year old, and it wasn’t long before I began participating in open mic readings and attending workshops.  I’d say that’s when I began to realize how important it was to me for poetry to remain a central part of my life.  In college I knew I wanted to write my thesis in poetry, and I was privileged to work with some incredible poets in the creative writing program at Carolina, who pushed me to dig deeper into questions of identity and belonging.  The content of my writing was initially pretty eclectic, but as patterns emerged regarding the strength of particular works surrounding specific themes, I started to delve more thoroughly into exploring questions around my ethnic heritage.

HM: You are Taiwanese and Italian, right? How has your particular mixed-race background influenced your writing?

EBW: Yes, my father is a first-generation immigrant from Taipei, Taiwan, and my mother is third-generation Sicilian–her family comes from the town of Santa Croce Camerina.  I definitely think that being biracial has impacted me and my writing differently than it would have had I been fully ethnically Taiwanese.  For one thing, only being able to claim half of my identity as a racial minority, instilled in me a level of self-doubt that made speaking out and writing about my experiences difficult.  I found myself constantly questioning, and being questioned on, whether I had the credibility or the right to make certain claims, or any claims at all, about life as an Asian-American.  Growing up in a comfortable suburb in New Jersey, the vast majority of my friends were white.

My Asian friends were conspicuously aware of their ethnicity in a way that I was not, but often wanted to be, even when it was the subject of derision–because it was still a marker, an indicator of an identity and in-group to which I wanted to belong.  I wanted to be able to commiserate, to share stories about going to Chinese school on Sundays, to talk about being teased for the foods that my father packed me for lunch, but often I felt like I wasn’t “Asian enough” to be a part of those conversations.  On the other hand, I also enjoyed many of the privileges of being white-passing.  I don’t think I had to work quite as hard as some of the other fully ethnically-Asian kids in my town to make friends; there was less of an inherent expectation that I was “uncool” or a “nerd” because those were stereotypes associated with being phenotypically fully Asian.

So a lot of my writing works to capture these swirling, often conflicting, feelings of guilt and pride and confusion and a desire to belong to both the white community and the Asian community, and frustration at how mutually-exclusive those desired seemed to be.

HM: Can you tell us a little about your piece that will be published in Chrysanthemum?

EBW:The piece that’s going to be published in Chrysanthemum is called “Inheritance,” and is a recollection of a day I spent in Taiwan with my father and my grandfather cooking yams in mud ovens.  It’s a strangely vivid, but also blurry, memory for me.  There were very specific things that I remembered from that day, the way the air and the dirt felt, flashes of my grandfather’s face, the taste of sweat.  But also, this was almost a decade ago now, and I don’t remember anything about leaving the city to get to where we were, or getting back.  I don’t remember anything that was said that day, but I remember recognizing that it was a very special, very rare, instance of three generations of the men in our family–my grandfather, his son, and myself–doing something so uncharacteristically intimate.  I wanted to capture and memorialize that.  It’s a piece about masculinity, violence, tradition, family, and separation in the Taiwanese-American experience.

I’m also really excited to say that another piece that I had to withdraw from consideration in Chrysanthemum, “Being of Islands,” more explicitly about my mixed heritage, was recently selected by poet Major Jackson as the winner of the 2017 Ruth Stone Poetry prize and will be appearing on Hunger Mountain’s online literary magazine this fall!

Order your copy of Chrysanthemum: Voices of the Taiwanese Diaspora on Kickstarter