How’s your summer going? I haven’t written a personal update in a while… You know how when you haven’t talked for a while, sometimes you think you need a LOT of time to catch up so it’s just easier not to reach out at all. Ahem. Anyway. I’ve been thinking a lot about Asian American history — especially connecting the dots from the early days to today. 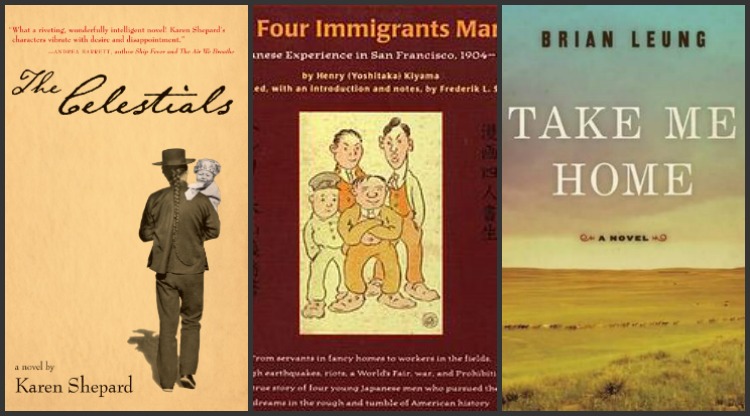 I’ve been busy, traveling to Taiwan in May for my grandmother’s funeral and then going to Portland earlier this month for the Tin House writers’ workshop. I’ve also done a fair bit of reporting this spring and summer on topics related to Asian American history, so maybe I can share what’s been on my mind by showing you what I’ve been reading.

Karen Shepard was one of the fiction instructors at Tin House. I saw her novel The Celestials displayed at the bookstore. Reading the cover, I was drawn into the story which centers around a team of Chinese workers, brought to a Massachusetts shoe factory during the 1870s to break a union strike. I recognized the historical detail — it was mentioned in the Chinese Exclusion Act documentary — and became interested in the fictionalized story, which focuses on the white wife of the factory owner and the mixed-race baby she ends up birthing.

It reminds me a little of the premise behind Brian Leung’s Take Me Home, another historical novel, which features a white woman in Wyoming Territory and her relationship with a Chinese. I have to admit, that book has been on my (too crowded) bookshelf for a while, but I definitely will be reading it soon.

In the course of researching my NPR article about the Chinese who worked in early Sonoma wineries, I came across the nonfiction book Garden of the World by Cecilia Tsu, and am also reading that. I’ve recently become fascinated with San Jose Chinatown — of which there is barely any trace left, after it was burned down during the era when many more rural Chinese settlements were burned to the ground by nativists.

And you if you follow my reporting, you may remember that I interviewed Berkeley playwright Min Kahng for NBC Asian America last spring about his musical adaptation of The Four Immigrants Manga, thought to be one of the earliest graphic novels. Over the weekend, I had a chance to see the musical performed in Palo Alto, and it didn’t disappoint. My 12 and 15-year old boys found it interesting and easy to follow, too. The show runs through, August 6 and tickets are available through TheatreWorks.