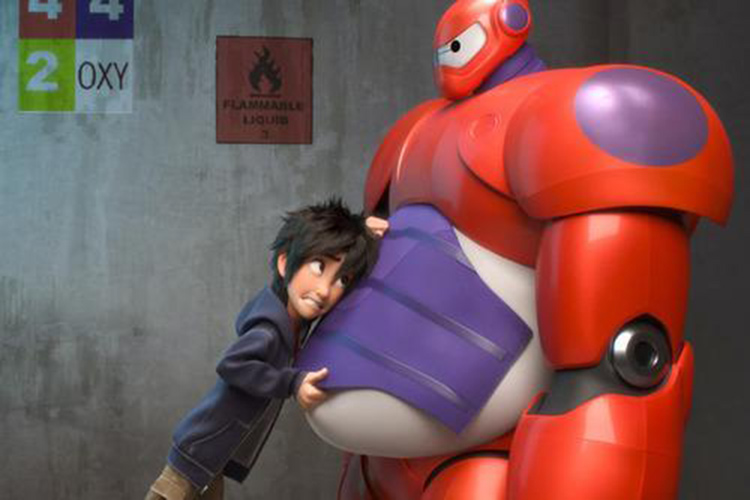 The main character of Disney’s Big Hero 6 is a Hiro Hamada, a Japanese-Caucasian mixed-race boy living in the imaginary city of San Fransokyo. I stumbled upon the new animated movie, when searching for something we could do as a family last weekend. While I had seen a few bloggers posting photos from a Disney event aimed at publicizing the movie with “mom bloggers”, I didn’t realize at first that the main characters were Asian — mixed-race, at that — except for hearing the buzz in some Asian American pop culture watching circles (Nerds of Color has written about Big Hero 6 since   its casting was announced and Audrey Magazine had a writeup about the biracial actors who voiced the roles of brothers Tadashi and Hiro).

Big Hero 6 was a great movie with a heartwarming story, fantastic animation, and some cute references — such as Go Go Tomago’s armor being fashioned in an homage to Pikachu. It would have been worth seeing regardless of what race the main character was, but had I not heard about the Asian American hero, we might have missed this film in the theater… and missed out on the fun. And I’m sure other Asian parents would, too.

After thinking about it for a while, I was really surprised that I haven’t seen more buzz about Big Hero 6 among my fellow Asian American mom (and dad) bloggers. I did a quick survey of the blogosphere and found that a couple prominent bloggers had been contacted by Disney PR, but they are folks who are on the mailing list for all Disney publicity, and there was no specific marketing targeted at Asian American parenting sites. I’ve seen Disney do outreach among Latina bloggers, although there were mixed messages about whether the character Sofia the First was supposed to be Latina or not (then backtracked and said Sofia was not supposed to be Latina, after all). Disney also did some tie-ins to Black History Month for its African American character Doc McStuffins.

So, I’m curious why Disney didn’t make more of a concerted effort to engage Asian American parenting blogs and social media influencers in its marketing campaign?  After all, Asians are the fastest growing racial group in the United States and spend more time online than any other demographic. The cynic in me thinks the company didn’t want Big Hero 6 to be pigeonholed as an “Asian” film, as if movie goers of other races wouldn’t want to watch it. In fact, the Asian-ness of the film is really limited to the Japanese names of the protagonists, a few references to food, and the Oriental-ish architecture of the setting. Unlike, Disney’s other Asian-ish movie Mulan, which is loosely based on a traditional Chinese tale, Big Hero 6 is based on a Marvel comic and doesn’t require any cultural knowledge. The night that we went to see the movie, my boys and I were the only Asians in the house. In fact, sitting right near us were a dozen or so elementary school kids we knew — all of them white and all of whom seemed to enjoy it.

Still, it means a lot for me to be able to take my sons to see a movie with a “Hiro” who looks like them. I’ll probably still tell my friends and family about Big Hero 6 and maybe even buy some toys and other merchandise, and so will other Asian parents. I just wish Disney would celebrate this for the milestone that it is.

More on the significance of ‘Big Hero 6’ to Asian American families: