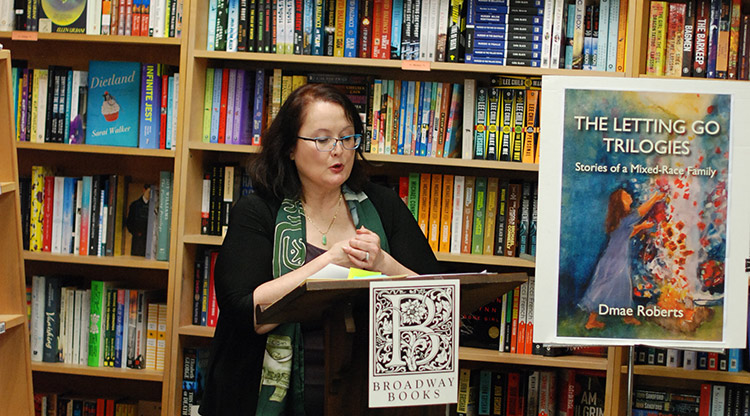 I’ve gotten to know journalist Dmae Roberts through social media and was excited to read her new memoir, The Letting Go Trilogies, (Amazon affiliate link) about growing up as a mixed-race Taiwanese American. It’s an engaging read — I finished it in a day — and was even surprised to find out she once lived on the same street where my mother grew up!

Want to learn more? Read on for my interview with Dmae…

HapaMama: Why don’t you start off by telling me a little bit about how you came to write your memoir. What was the process like? How long have you been working on it?

Dmae Roberts: Since I created my documentary Mei Mei, A Daughter’s Song in 1989, I’ve been been writing personal radio pieces, stage plays and essays since that time. Much of it has been about my family and my biracial identity. Mei Mei opened the floodgates for that and was my “blowing my cover” as Secret Asian Woman if you will. The latter was title of a more recent documentary about mixed-race identity. I also worked more intensely during the three-year period of my mom’s illness and wrote several chapters of my memoir then. A few years later I spent a year detailing the memoir and adapting more of my radio documentaries and stage plays into chapters. But focusing on the grieving process itself got too difficult so I paused it for a couple of years. Instead I focused on publishing short essay pieces drawn from the larger memoir in anthologies and magazines.

I pitched the memoir to agents and publishers at a couple of writing conferences but they all seemed confused and resistant to my story because it was so intertwined with my family’s stories. Agents especially would ask “is it your story or your mom’s or brother’s story?” And while they responded to my mom’s WWII dramatic story, they thought my personal story didn’t have the same drama. I wasn’t a heroin addict and didn’t survive a plane crash or anything as compelling as that. So after another couple of years, I received a grant from a local funder, the Regional Arts and Culture Council to hire editors and formatters to independently publish. Since I’ve worked for myself most of my career as an independent radio producer and writer, it was natural for me to go this route. What I’ve learned about self-publishing could be a topic for another essay. It’s difficult and time-consuming. I have respect for publishers and I definitely want my next book to be published by someone else. Ultimately it’s rewarding to have climbed this mountain though.

HM: The part where you detail your trip to Taiwan with your mother to produce MeiMei’s song was just so heartbreaking in how she had a hard time trusting anyone — even her own daughter. As a Taiwanese American writer, how do you think culture affects your feelings about writing your own story and perhaps “airing some dirty laundry”? And after your mother’s reaction to the radio documentary, did that affect your decision to write your memoir?

DR: First off, I want to say it’s cool your mom lived on Roosevelt Road, the same street as the student house I lived in when I came of age in Taiwan. Shortly after I returned from my trip, my father died in 1981. He was the one person who could object the most to what I wrote in the memoir since my mom couldn’t read and write. And because of the difficulties my brother had in school, and possibly because he might have an undiagnosed learning disability, my brother doesn’t read books. I’ve asked him if he wanted to read mine, and he shook his head. He’s never had a love of reading or writing. There is a certain freedom knowing there isn’t anyone in my family who could reprimand me.

However, my mom did get mad when we listened to Mei Mei, the radio piece together. She thought I did tell the world she was “stupid Taiwanese” because of a line in the radio documentary about her not being able to read and write. I know it was a source of shame for her. She didn’t get how I was telling her story from her point of view and sharing details of her life to show how amazing it was she survived the trauma of being sold as a child and the physical abuse and horrors of WWII. It was heartbreaking for me to understand how frustrating life in America was for her, a brilliant woman treated as a child because of her lack of formal education. She didn’t trust me because of my education as well as the abuse she experienced in her childhood and early adult years. And living with the racism of America at that time furthered her sense of distrust. As a witness to that racism and to her frustrations with life, I couldn’t help but view America from her perspective.

While I’m proud to take risks artistically in my work, at the same time, I’ve had older generations of Taiwanese and Taiwanese Americans who have chastised me for peddling (a phrase I hate) “pain-porn” because I have told my mom’s war-torn story. What a hurtful thing to say to someone who is speaking from the heart and basically laying out the facts of a person’s life. I’ve also had white Americans shaking their fingers at me saying “You’re a bad daughter!” I’ve had comments from white colleagues in radio and theatre who think I have it easy and downplay my achievements because I can write and produce work about the “race thing.” I’ve received criticism from all sides. In the end, one needs to speak one’s truth regardless of the consequences.

HM: Another big theme in your story is the concept of being an “undercover Asian woman”. Why is important for people — even people who are not Asian or mixed-race — to understand this experience?

DR: As a “Secret Asian Woman” it’s been my mission to call out racism whenever I experience it. Mind you, it’s rarely if ever directed at me. It’s usually directed at other people by who assume I’m white and who turn to me with a “wink-wink, nudge-nudge” attitude. I have to say though it’s made it easier for white people to seek me out because I am half-white to ask me what they would be afraid to ask a mono-racial Asian American. I generally have intriguing, sometimes difficult, conversations with people about race. In the next year, I’ll be having more of these conversations in Oregon as part of Oregon Humanities Conversation Project. I’ll be going to different towns and cities in Oregon trying to get people to talk about mixed-race so I’m looking forward to having conversations. Oregon has always been mostly white but demographics are quickly changing and it’s an exciting time.

I’ve spent an adulthood looking for a name for my identity and to figure out where the heck I fit into all the “Check Other” categories through the years. It’s only been in the last decade or so I’ve found other mixed-race, multiracial, bi-racial, Hapa people. After growing up in Taiwan and Japan, I’ve lived in Oregon most of my life pretty much in isolation regarding other AAPIs. Before social media, we couldn’t find each other as easily as we can now. I find hope in millennial mixed-race Americans who accept each other’s races without having to define it into a “checked box” and who find each other across the world in social groups on Facebook. It allows people to call out racism even more and to find community and kinship as multiple races. It’s a brave new world with such great multiracial people in it.

HM: Finally, your brother, Jack. He is almost like your foil in the story, like the path the your life could have taken. Is there a gender component to your narrative? Or do think his story is more just unique to his own particular experience?

DR: Oh my brother…we couldn’t be more opposite from each other. He was so harassed and bullied that it made him turn inward for the rest of his life. I also suspected he has some mild form of autism but I can’t get him to see a proper mental health expert. Psychiatry of any kind is still looked down by older AAPIs. My mom used to call them “koo koo doctors”—though she could have used some help dealing with her own survivor trauma. Jack was always shy but when he encountered racism from the mean boys at the rural school where we ended up after coming from Japan and Taiwan, he shut down completely. It didn’t help that living in the small town signaled the downfall of our family and it was the point we all fractured into our own isolation. My mom and dad fought constantly, Jack became trapped in a daily hell at school. I separated myself from my family and only connected with my friends at school.

I think you’re right about the gender component. Jack definitely had it worse as a boy, because boys were not only meaner, but they physically assaulted him throughout his school experience simply because he was Chinese. But Jack was also shy to begin with and didn’t know how to stand up for himself or to fight back. I’ve always been more of a fighter, which is a trait I take after my mom. Though I never look for a fight, I generally will stand up for myself. Some people have more difficulty with that and Jack is still that way. I think his compulsion to collect bottles and cans and whatever else he finds on the streets is one way he could have control over his life especially when my mom became so domineering and managed every aspect of his life. And I don’t know if your readers find this true but I’ve heard from other AAPIs about the bachelor uncles, cousins or brothers in their family. That’s Jack and one of the things I’ve had to let go of is that he’s found a kind of peace with that. It’s not the life I would choose but he’s as happy as he can be simply being. His story is a reminder to me to let go of things I have no control over and to make my piece with that. Letting go of grief, guilt and regret was easier for me than letting go of control and trying to make change in my brother’s life. I love him and I wanted him to be happy. But it was my ideal of happiness. Not his. So I’ve made peace with that.

HM: Where can people buy your book or see your readings? Anything you’d like people to know?

DR: It’s available via CreateSpace, Kindle, and Amazon (affiliate link) in a few days. It’s also available directly from me on my site  and through MediaRites.