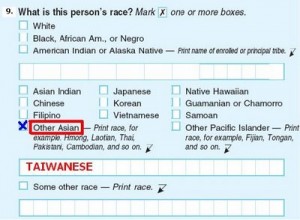 If you’re Taiwanese and raised by politically aware parents, what box do you mark on the US Census form? Chinese? Other Asian?

This weekend, some Taiwanese American filmmakers, along with TACL and TAP, will be filming a PSA (that’s public service announcement, for those of you who don’t speak television) encouraging folks to write-in TAIWANESE on the 2010 US Census. And among the beautiful people, they’d like to have some Taiwanese Hapas.  So if you live in the Los Angeles area and are free this Saturday, this could be your chance to be in the spotlight.
According to TaiwaneseAmerican.org, one major issue for the Taiwanese American community is the lack of accurate identification of those who have ties to Taiwan:

In the 2000 Census, there were only 144,795 Taiwanese identified. Anyone who is actively involved in our Taiwanese American community knows that this is inaccurate. Current working estimates of the Taiwanese American population is probably in the range of at least 1 million. We are severely under counted by at least 80%!
The main issue in the US Census is the lack of an identification check box that allows us to easily identify ourselves as of Taiwanese descent. So, for now, we are the “Other Asian” and we need to declare our identity by writing in “TAIWANESE” in the 2010 Census.

Quick rundown of what we are looking for (and any names will need to be accompanied by a photo please):

And with all that said, anyone with an interesting background or that does something unique (aspiring musician, writer, leading scientist, athlete, military, etc etc — aka most of you!) would be a plus. Remember that the goal is to show the huge diversity in the Taiwanese American community and all aspects of it. We need photos to accompany all names since spots are limited due to time and budget constraints.

The PSA will be filmed in Los Angeles this Saturday, January 30th, from 8am to 5pm. The PSA is going to be produced by Jon Lee and directed by Karen Lin.

If you’re interested in taking part, and aren’t already connected with the Taiwanese American community, email me and I’ll put you in contact.