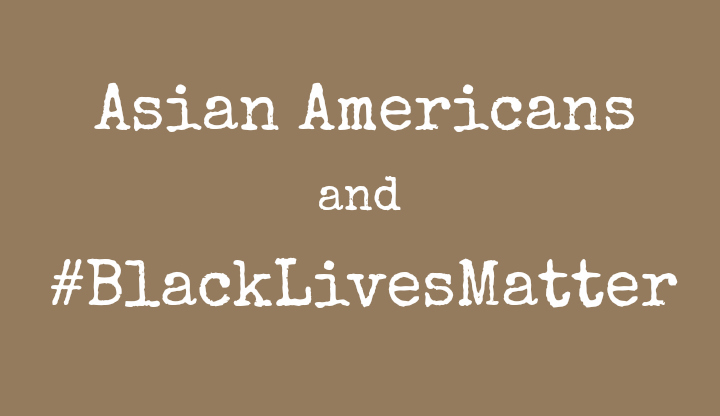 It’s been a tragic and mind-numbing week for police shootings of Black people, and the shooting of police officers in Dallas, and it makes me so bordering on hopeless about America that part of me wants to throw my hands up and not think or write about race or politics anymore. But that’s not going to happen. Because we’re living in a time that is so volatile and critical that  no people of color — including Asians — have the luxury of looking away or just minding our own business. So I want to collect and share some of the most compelling things I’ve read this week regarding the role and potential for Asians and #BlackLivesMatter.

Have you seen the crowdsourced letter from young socially-conscious AAPIs to their (presumably immigrant and more conservative) parents about #BlackLivesmatter? Here’s a snippet that I found most relevant:

It’s true that we face discrimination for being Asian in this country. Sometimes people are rude to us about our accents, or withhold promotions because they don’t think of us as “leadership material.” Some of us are told we’re terrorists. But for the most part, nobody thinks “dangerous criminal” when we are walking down the street. The police do not gun down our children and parents for simply existing.

This is not the case for our Black friends. Many Black people were brought to America as slaves against their will. For centuries, their communities, families, and bodies were ripped apart for profit. Even after slavery, they had to build back their lives by themselves, with no institutional support—not allowed to vote or own homes, and constantly under threat of violence that continues to this day.

In fighting for their own rights, Black activists have led the movement for opportunities not just for themselves, but for us as well. Black people have been beaten, jailed, even killed fighting for many of the rights that Asian Americans enjoy today. We owe them so much in return. We are all fighting against the same unfair system that prefers we compete against each other.

My friend Betty Ming Liu writes from the perspective of being a Chinese American mom, imploring her peers:

Chinese American moms can instantly help make America a safer place by uniting with the Black community. This is a radical thought because everyone is also talking about Asian Americans being anti-Black, especially immigrants.

As people who suffered from anti-Chinese racism that banned us from immigrating for decades, any form of anti-Blackness from us is hypocritical. Besides, our kids who are born and raised in the U.S. embrace Blackness as part of their American heritage.

Another Asian American mom, Thien-Kim Lam at I’m Not the Nanny writes:

Talk to your nieces, nephews, cousins, students–everyone. Teach them how our skin color matters. Teach them our country’s sordid history with race. Tell them how we can learn from our mistakes.

Those of us with brown skin shouldn’t be the only ones teaching our kids about race. Learning about each other’s differences teaches compassion and empathy for others. This is why I’m so committed to sharing diverse books on this site.

Start the conversation now. Don’t wait until another black person is killed.

Please, Talk to Your Kids About Race #SaySomething

Jenn Fang at Reappropriate wrote this soon after the police shooting of Philando Castile, when there was speculation that the officer who shot Castile was Asian:

Most of the blogs I’ve noted above are written by Asian women who are married to Black men or have children who are Asian-Black mixed-race, so perhaps they have a much more personal and urgent connection to #BlackLivesMatter. But I don’t think that morally or practically, this is a concern only for people who look like the people who have been dying.

There is, of course, the moral imperative to call attention to and stand against injustice, but as Asian Americans, we inhabit a unique — and uniquely fraught — position in the racial fabric of the United States. It is too easy for us to be pitted against black and brown people as the Model Minority or even to just ignore current problems and be safe in the bubble of college-educated, suburban, professional, safe America, not realizing what we are quietly sacrificing for this “comfort”. And I’m going to venture out to say that for Asian-white mixed race people or Asians in interracial marriages, it is particularly easy to feel removed from these dangers.

If you need to read more about the history of this being used as this kind of wedge — from the Hawaii’s sugar cane plantations — as well as the resistance against it, please read the essay We Will Not Be Used from Mari Matsuda’s Where Is Your Body (Beacon Press, 1996). Thanks to Jenn for originally calling attention to it on Reappropriate. I’m going to order the book…