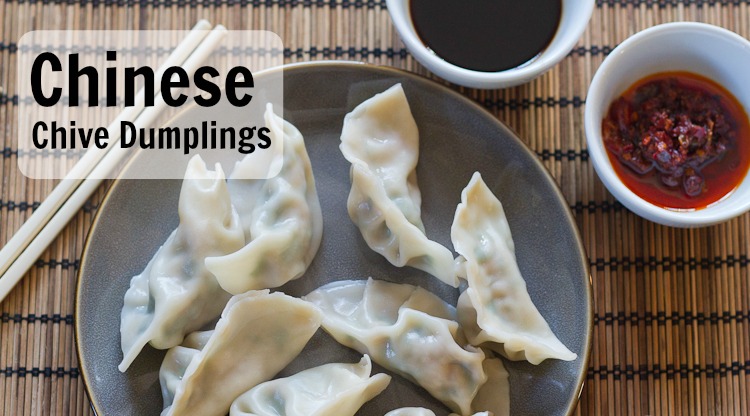 Homemade Chinese dumplings. They can be either hearty or delicate, and pretty much nothing is better — except maybe Chinese dumplings with chives. Not the wimpy little green flecks atop a baked potato… but the thick, aromatic, even pungent kind known as garlic chives.

I remember that my mother used to grow these in a little garden outside of our apartment in Michigan. They looked very similar to crabgrass, only longer and more fragrant. While she used a pair of shears to trim off stalks of the chives, I used a small pair of household scissors to snip bits of the grass and weeds that sprang up around the plot.

Nowadays, we just go to the Asian market to buy chives. They’re most bountiful in late summer or fall, but they are available pretty much year round. In Mandarin, they are known as jiu cai. In Taiwanese, they are called ku chai. The bunches they are sold in are huge and you will only need about one-third of it for the dumpling filling, so find other uses for the excess. Chives are great scrambled with eggs or stir-fried with noodles. 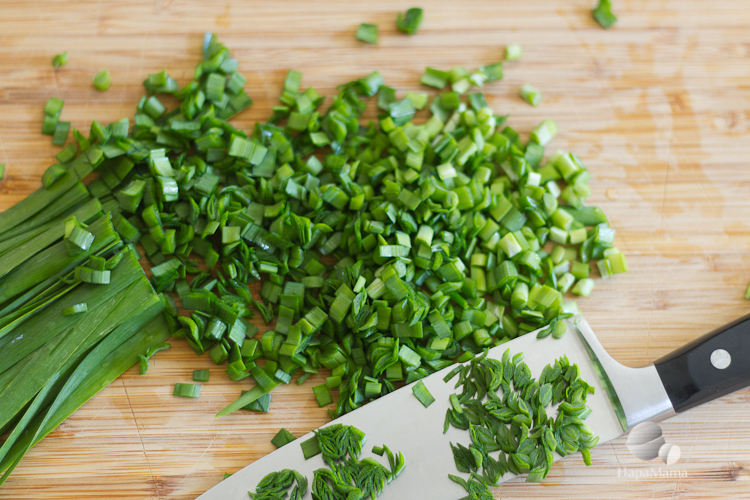 Many people think of homemade dumplings as a special-occasion treat. But really, they shouldn’t be.

With store-bought wrappers, Chinese dumplings can be an easy dinner. My mother and I used to wrap them regularly on weekday afternoons. She’d lay all the metal bowl of filling and a plate of wrappers in the center of the kitchen table.

Pick up a wrapper. Place a small oblong dab of filling in the middle. Dip your index finger into the small bowl of water that you keep on the table for this purpose and wet the edges of the skin.

The motions are burned into my muscle memory.

While you’re folding, start boiling water in a big pot. This is not the kind of dinner you cook and have sitting around, waiting for everyone to be seated. During dumpling nights, someone had to be constantly popping up from the table, manning the bubbling pot and scooping out each new batch of dumplings and rushing them to rest of the hungry family. 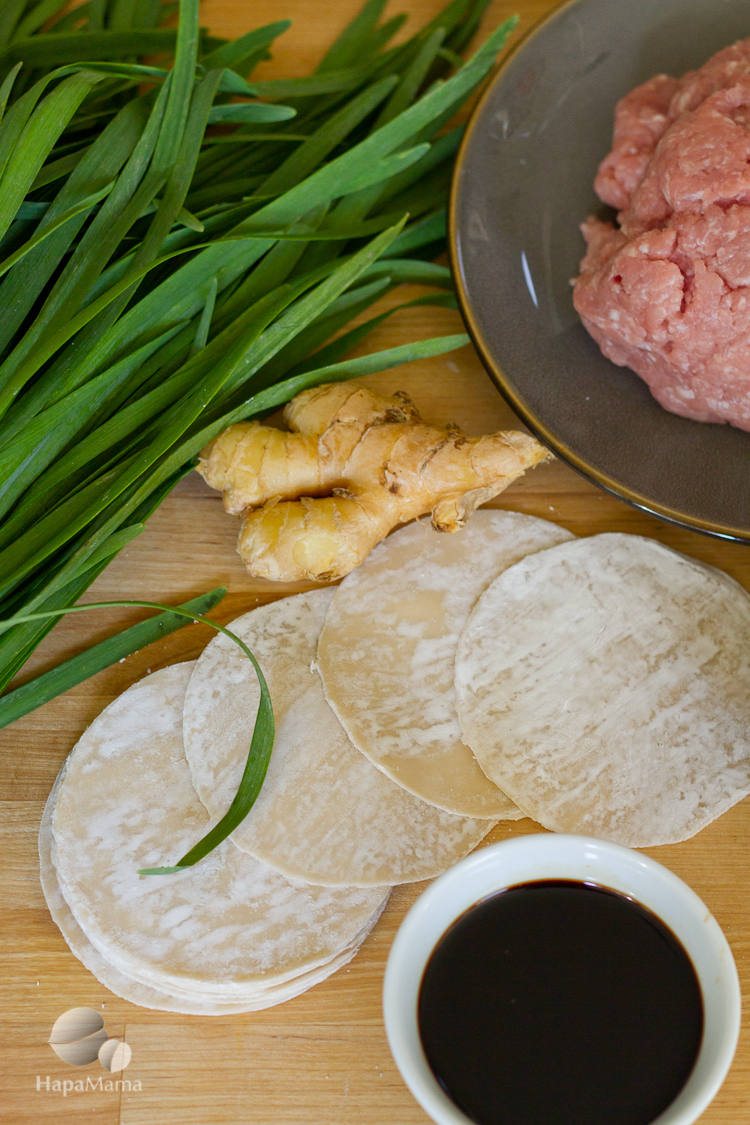 Most of the ingredients are things you probably already have in your refrigerator or pantry or can easily buy at any grocery store. Ground pork, soy sauce, rice wine, sesame oil. The only things you may need to go to an Asian market to buy are the garlic chives and the wrappers. Most large supermarkets carry dumpling skins, but Chinese markets carry a vast array of wrappers, specialized for jiao zi, guo tie, gyoza, won ton, or siu mai.

Sometimes, we’d make a big batch and freeze the extras on a floured baking sheet. Or just eat them all.

Scroll down for the recipe… 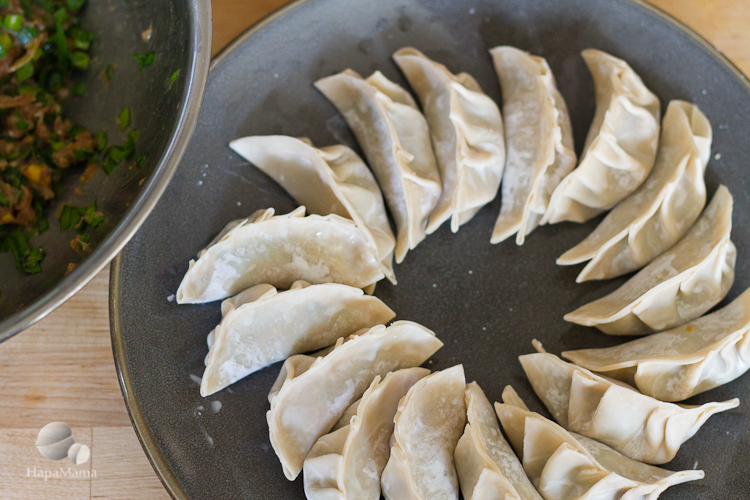 Want to freeze extra dumplings? Scroll down for tips… 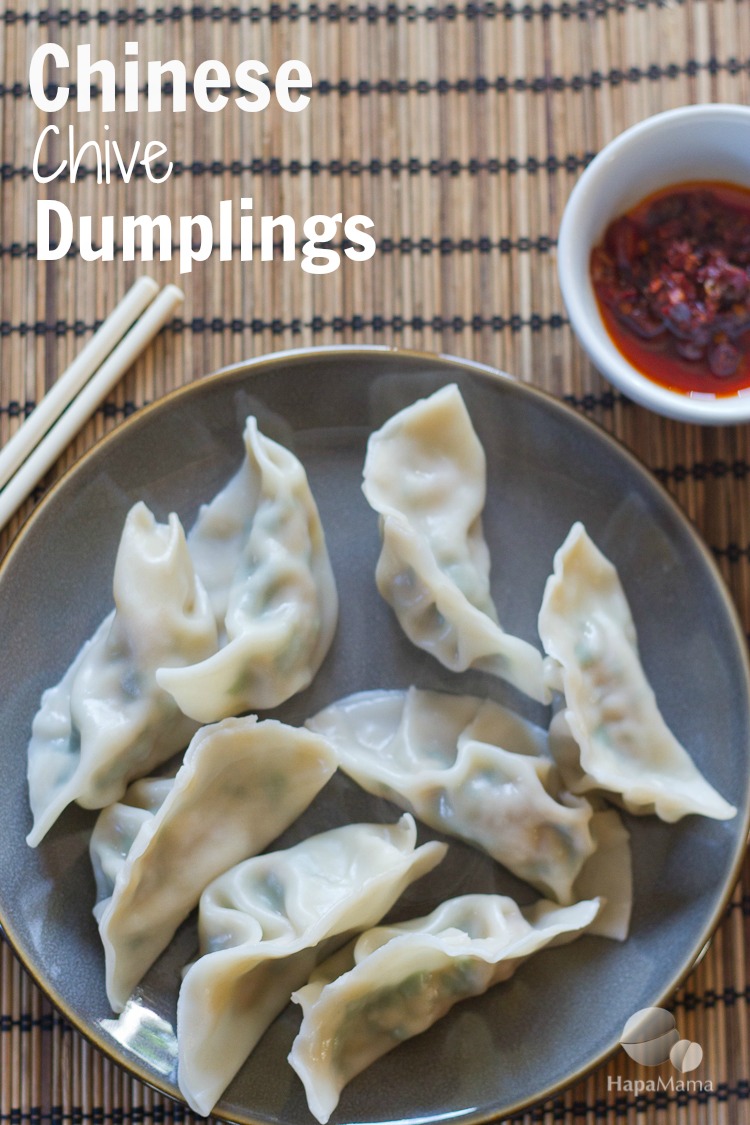 Cover the floured tray of dumplings tightly with plastic wrap. Freeze about six hours or overnight until just frozen solid. Remove them to a freezer-safe zipper bag for long-term storage. Don’t store them on the tray or plate for too long, as they’ll get freezer burn easily that way. And don’t try to freeze them on a surface that isn’t floured. You’ll end up with one solid mass that is attached to the plate. Frozen dumplings will take much longer to cook, about 10 minutes.