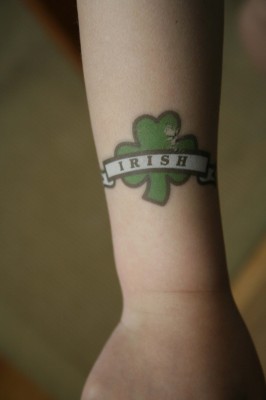 Wearing of the green

Fourteen years after my wedding day, I learned that I am married to an Irishman. The surname Lynch was a clue, as was the paternal grandfather whose auburn hair once earned him the nickname “Red”. But my husband’s family maintained they were part of the English branch of the clan.

Then my firstborn entered Kindergarten and displayed a preternatural ability for making leprechaun traps and dancing the Irish jig. “Are you sure your ancestors aren’t from Ireland?” I asked my husband. The paternal side of his family was from New England. It would not have been uncommon for Irish immigrants to “pass” as English to escape the discrimination of the early 20th century.

Recently, my husband decided to end the questioning with an online DNA testing service, 23andMe. This service bills itself as a way to gain information about hereditary traits, revealing genetic markers for health conditions and ancestry. He ordered the kit for $199 and submitted a saliva sample. A few weeks later the results came back: his paternal lineage was 100% Irish.  Scientific testing quantifiably confirmed what a woman’s intuition knew all along… 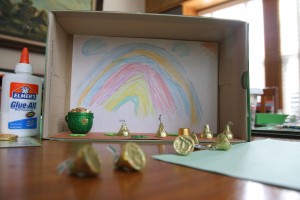 Although it is not my own personal heritage that is being revealed, I find it exciting. I’ve never liked telling my children that they are half-Taiwanese only to let the other half remain nebulous.  “American” is not a suitable enough description for my husband’s heritage, since no matter what our ethnic origins we are all American.

As the daughter of immigrants, the idea of not knowing where one’s ancestors come from feels incomplete. When my husband and I travelled to Taiwan before our children were born, we visited the ancient Buddhist temple where my great-grandparents attended school. My father pointed out the site (now part of a trendy shopping district) where his childhood home once stood.

My husband and I don’t know how to be Irish or to celebrate St. Patrick’s Day properly. I admit that my constructs of “Irishness” are probably heavy on the glittery green equivalents of red brocade and chopstick lettering.

But somehow, even when we got married, we had a instinctive affinity toward all things Celtic, as we chose this traditional Irish blessing for our wedding ceremony:

May the road rise up to meet you.

May the wind always be at your back.

May the sun shine warm upon your face,

And rains fall soft upon your fields.

And until we meet again,

May God hold you in the palm of His hand. 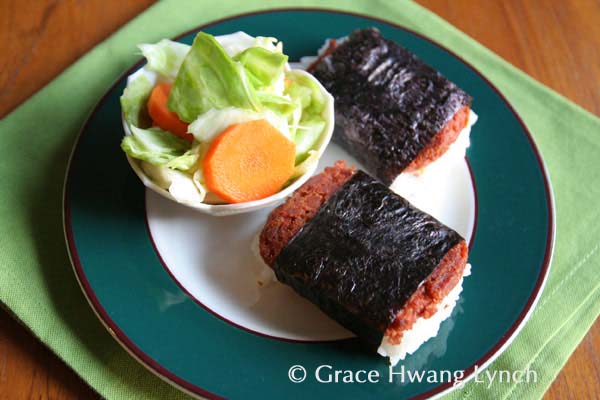 For a Pacific riff on the traditional Corned Beef and Cabbage, click on my recipe for Corned Beef Musubi and Pickled Cabbage.