With St. Patrick’s Day just around the corner, it seems like everyone wants to be Irish. Are you — or your kids — part-Irish… but don’t look it? That’s what happened to Leslie V. Ryan‘s children, time and again, and inspired her to write her first book, I Am Flippish. Ryan is a Filipino American married to an Irish American husband. She is also a fellow Cal grad and a breast cancer survivor, and actually began the process of writing while on chemo.

Recently, I had the opportunity to interview Ryan, a mom of two from Orange County, California, about racism directed at multiracial kids, and about the journey to publishing her book. A lot of it sounds familiar to me, and I think other mixed-race families will relate, too. 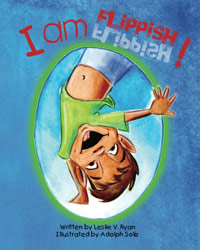 How did the idea for this book come about?

During St. Patrick’s Day, my son Sean wore a “Kiss Me I’m Irish!” hat to school and one mom told him that he didn’t look Irish and can’t be Irish.  I knew the mom and even though she said it as a joke, it thought it was pretty hurtful.  I think at that time I was very vulnerable and overly sensitive due to being ill.  What made it worse was that my son took the hat off and never wore it again.  That same day he asked me if he was Irish.  I told him yes he is 50-50 – half Filipino and half Irish.  He is Flippish. I even showed him where Ireland and the Philippines are on the map.

I decided to explain even further a few days later by looking for picture books about bi-racial/multicultural families at the local book stores and to my frustration didn’t find any that talks about race.  I found books that talk about different animals mixing, but not people.  Frustrated and still feeling overly sensitive and hurt (I think the chemo and all the drugs they pumped into made me like this) I decided to write a story that actually talks about Hapa, mixed-race, mestizo, biracial, or multi-cultural families.

In I Am Flippish, the dad, who is white, goes to the volunteer in his Hapa son’s class one day, and the kids don’t believe he’s the main character’s father. Did that really happen? And did the kids really ask questions of him as in the story?

No, that didn’t happen. However, every time he was with my kids and I’m not around he would get stares from Caucasians. Usually old ladies would give him a second look. Other people thought my kids were adopted and would ask him where he adopted them from.

How is it important for mixed-race kids to read books that reflect their experience?

I think it is important for children, especially mixed-race children to read books that explain their mixed heritage and how to address any adversity they come across their lives.   Here are the reasons why:

Sometimes mixed-raced kids go through adversity e.g. bullying because they looked different or awkward questions such as “What are you?”  When they read books explaining why they look different from a parent they would feel that they are not alone and can relate to the character in the story.  With my book “I am Flippish!” my character Sean, his parents and teacher turned a negative situation into a positive by teaching his friends a few things – that they all got the best traits of their parents, they learn where their ancestors came from and gain family pride.

So when somebody asks a mixed-race child “What are you?” or “How come you don’t look like your mom or dad?” Then the child can proudly answer, “I am …(whatever combination of countries the child can make up).  For example my children will say “We are Flippish!”  When a child acts proud and confident, it disarms whatever negativity the questioner has. 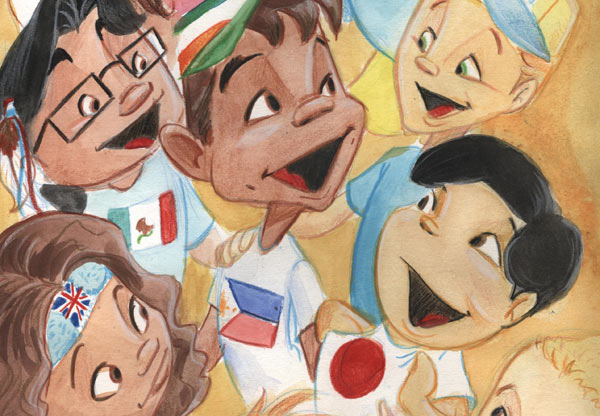 The characters in I Am Flippish all make up nicknames for their ethnic heritages, illustrated by Adolph Soliz

I Am Flippish is a self-published book. Tell us about the kind of reactions you received from mainstream publishers when approaching them with this manuscript…

Funny you asked this question. I sent ten agents and publishers my manuscript, and I received ten rejection letters telling me they read it, it is great but it is not something they are interested in selling. I think they are afraid that my book is too in your face and too controversial. But I want to talk about it!  And I think a lot of parents of mixed marriages feel the same way I do!  Let’s confront it, talk about it, and deal with it.

Yes, bullying is present in this world.  And so is racism.  I came up with this concept called “backhanded racism.”  For example, my Irish husband was at a party with my Flippish kids and a friend patted my husband on his back and told him “Boy, your kids look nothing like you!  They look so Asian. Are you sure they are yours?”  Even though it was meant as a joke it was pretty insulting. Backhanded racism is kind of like backhanded compliments.  You want to backhand the smiling face of whomever makes stupid comments like that.

So with backhanded racism very much present in our world today, books that confront real life situations especially for mixed-race kids is very much needed.  It is an untapped market that publishers and agents have ignored or haven’t realized there is a need for.  I don’t think they realize the growing amount of mixed-raced kids in the US.  Or, maybe they turn a blind eye and do not want to face reality?  Or is it too touchy and controversial of a subject to publish?   Maybe these publishers and agents live in a very monochromatic world.

So after I received the final rejection letter, I was very discouraged and decided to hang up my dream of being a writer, shove my manuscript into a filing cabinet and forget about spreading my story to the world.  That night I had a strange dream.  I dreamt that I was swimming underwater.  It was cold and I was swimming underwater like a mermaid.  It was strange because I am afraid of the water and do not swim let alone swim underwater.  Then all of a sudden Dory (from Finding Nemo, complete with Ellen DeGeneres’ voice) swam up to me and asked if she could swim with me.  I told her sure.  The whole time Dory sang “Just keep swimming, just keep swimming…”  It absolutely drove me bonkers.  Just as I was about to tell her to zip it, we came upon a large hole. I looked around me and realized I was swimming inside a net.  Dory then swam through the big hole, turn back to me and said, “See, if you keep swimming you will find a way out.”  Then she disappeared.  That was when I woke up.  The dream was so profound I can still remember the cold water.

That dream about Dory and Ellen was actually quite symbolic for you.  And your son’s teacher played a role in encouraging you to publish your book?

That same week, I was talking to my son’s 4th grade teacher Eric Hartman and he told me he was working on a novel.  I shared my story of rejection and frustration. I asked him to take a look at my manuscript since he is a teacher who loves children’s books. If he told me that my book was okay and it needed work and there might not be a market for it, then into the filing cabinet the manuscript goes.  The next day after I emailed him the manuscript he enthusiastically told me that I need to publish my book. Then when I finish it, I need to send it to Ellen.  Not Oprah, he mentioned Ellen first.  I got goose bumps because I remembered my Dory dream!  The “Aha” moment came when I realized what Dory tried to tell me:

“Just keep swimming, keep trying because you will find a way to fulfill your dreams!”

I told Eric that I was rejected ten times and I don’t think I can take anymore rejection. He told me that I needed to self-publish if I want to get my book out.  I thought to myself “What do I know about publishing a book?  Well, I can only try.  If I don’t I will always wonder.”  I gathered up all my courage and decided to self-publish. Eric introduced me to my illustrator Adolph Soliz who is also mixed-race (Indixican) and he felt connected to my story because he went through what my son went through when he was growing up.  The rest was history.