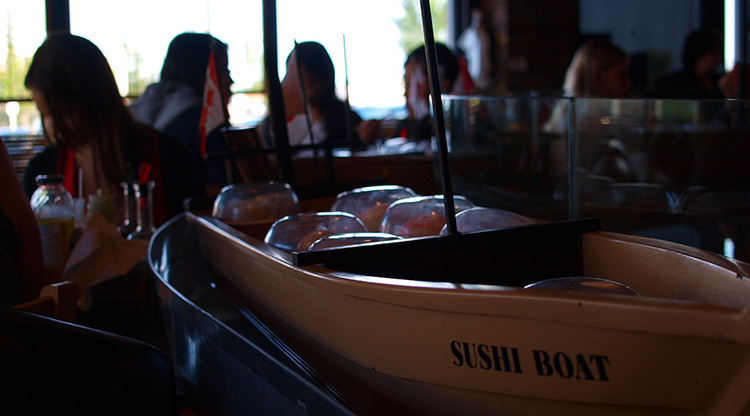 This was my first Editor’s Pick on the now defunct Open Salon, in May 2010, in response to an article by Francis Lam called Is it possible to dine out politely with kids? That site has now been closed, but the flame wars over toddlers in restaurants has flared up once again with the incident at Marcy’s Diner in Maine, I’m sharing it again now…

I’m one of Those People  — a stroller pushing mom who dares to wheel her children into (gasp!) a restaurant. After all, having access to a wide variety of eateries is one of my favorite pleasures, and one I want to share with my children.

From the time our babies were a few months old, my friend Liana and I would walk to a nearby park or library to get out of the house for a few hours and get in touch with a world outside of diapers, feeding, and colic. The fresh air and exercise did good for both ourselves and our infants, who usually fell asleep after a the morning outing, leaving us nursing moms famished from stroller pushing, and well, producing milk. Did we feel the need to scurry home to the piles of laundry to try to cobble together a meal while praying the babies would stay asleep?

No, we followed our noses — and our common sense — to the nearby sushi joint, where we downed miso soup and futomaki as if we didn’t know when we’d get another meal. If we were lucky, the babies stayed asleep in their strollers. It worked out fine. More than fine, really. Those weekly outings were what we looked forward to in a stretch of days that blurred together in the repeated tasks of early parenting.

Yes, we occasionally got a few dirty looks from other diners, when the babies woke up crying, which was usually remedied by feeding them or holding them in our laps while we finished our lunches. Sometimes, one of us would have to strap a kid in a stroller and high tail it home, throwing a few bills at the other to settle the tab.

Keiko, the proprietress of our local Sushi Boat, never seemed to mind. She learned the names of both babies, and came over to ooh and ahh at their changes each time we came in. As the infants grew into toddlers, the boys learned to sit in their high chairs and sip cooled down soup and eat gobs of sticky rice. Keiko made training chopsticks by rubber banding the ends together, and has even gone so far as to wipe my little ones’ sticky fingers with warm washcloths.

You see, in Asian culture, the practice of parents leaving children at home while they dine out, is a foreign concept. Even Francis Lam remarked in his Salon article that Chinese or Japanese restaurants were often more welcoming to young families.

When I went into the hospital for the birth of my second son, my mother came over to babysit the two year old. Where else did they go for dinner, but to Sushi Boat, where Keiko greeted my son by name, and asked my mother if I was at the hospital.

My boys are now five and seven (yeah, I don’t actually use the double stroller anymore, but who could resist?) and sushi and tempura are still some of their favorite foods. Like any red-blooded American children, they have their dietary pickiness. But unlike many of their peers, who subsist solely on chicken nuggets and grilled cheese, my kids have fairly adventurous palates: curry, naan, balsamic vinegar and tofu are among their favorite flavors. And I thank people like Keiko for making that possible.

Also read a post by the mom whom the restaurant owner yelled at, over at The Washington Post.

Read my follow up Why We’re So Worked Up Over Kids in Restaurants at Mom.me