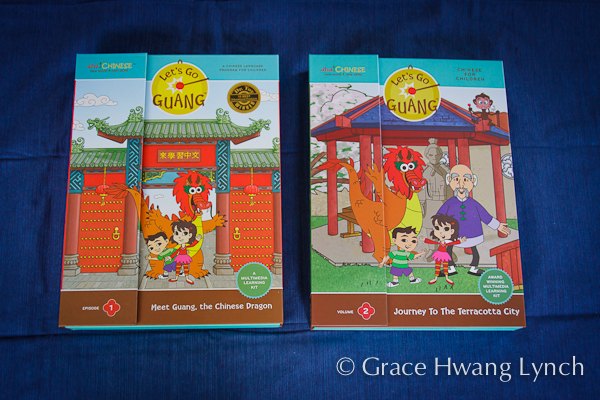 I’ve always thought that if learning Chinese could be more like watching Dora the Explorer or Dragon Tales, my kids would have a much easier time being bilingual. So when aha!Chinese offered me a chance to review their Let’s Go Guang! educational program, I was quite interested. Well, I may have found a system of books, videos, and flashcards that makes it fun (really!) to learn Mandarin. Let’s Go Guang is an multimedia language program aimed at kids aged 2-8 (or a nine year old Chinese School Dropout, hehe) produced by aha!Chinese. I watched the DVDs with my boys, and you know what? They really didn’t mind.

In Volume I, Meet Guang, the Chinese Dragon, brother and sister Ling and Kai find an old dragon mask that comes to life. In the process, they learn over many common Mandarin greetings and phrases. In Volume II, Journey to the Terracotta City, Ling and Kai travel back in time with Guang in Journey to the Terracotta City, while building upon previous vocabulary and learning more expressions.

Unlike some other programs made for the Taiwanese audience that our family has tried, Let’s Go Guang  has a style similar to cartoons American kids are used to watching on TV. The program was created by two successful Chinese American businesswomen, Janet Lin Lawson and Karen Wu Audi, who wanted to raise their own children to be bilingual.  Former George Lucas animators, an Emmy-nominated composer, a Broadway singer, and linguists from the Beijing Foreign Language Institute also collaborated.

Can the programs replace Chinese School?

“It can work in many different ways,” says Lawson. “It works well to supplement, it also works well as a standalone tool for parents who don’t have a good Chinese program around. The ideal scenario is one where they can watch these videos, which will make them ready and excited to learn Chinese, and then have a Chinese tutor/teacher/speaker who can pick up where these leave off. Children who have watched this program will know Vol 1 and Vol 2 will know over 110 words and phrases, and have a very positive attitude toward learning Chinese.”

Each volume costs $49.95 through the aha!Chinese store, and they’re offering a special 30% discount for HapaMama readers. Just enter the code HaMaSave30 at checkout. 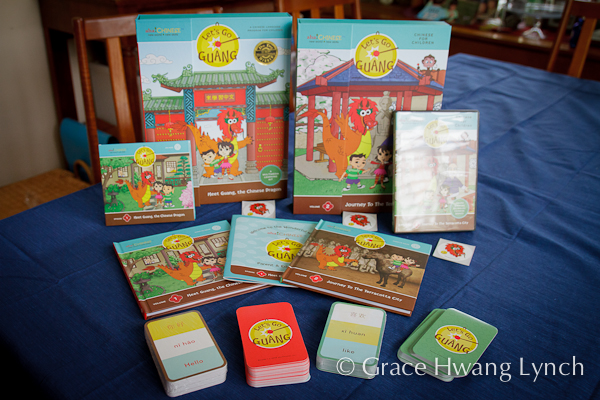 I was provided a copy of the program for review by aha!Chinese. I did not receive any other compensation and all opinions expressed are my own.

Check back next week for my interview with aha!Chinese co-founder Janet Lin Lawson, and get tips on teaching your children Mandarin.