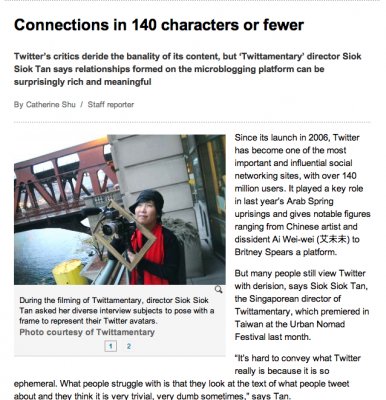 I’m a late bloomer when it comes to a lot of things. Twitter is one of them. So that’s why I’m especially thrilled to be mentioned in the Taipei Times as a Twitter account to follow.

Let me tell you about me and Twitter. It’s complicated. I avoided the social media site for a long time, associating it with updates on Ashton Kutcher’s life. As a die-hard Facebook user, I didn’t think I needed another platform, especially one that was confusing and limited the conversation to short snippets of  no more than 140 characters. When I started working as an editor for BlogHer last year, I realized I needed to learn how to use it. I set up my personal Twitter handle @HapaMamaGrace. It didn’t take long until I was hooked. Let me tell you why…

Twitter is inherently a public platform. As opposed to Facebook, where most people’s “friends” are people they know in real life, Twitter is based on followers who may or may not know you. That may not be a good thing if you want to post pictures of your kid’s dance recital, but if you want to publicize your blog, business, or cause, it is an excellent thing.

I think of Facebook as the digital back fence, where people share vacation pictures, updates about their family, and tips on local restaurants, events and such. Facebook is the gateway drug of social media. I got hooked five years ago when my cousin tricked me into signing up so I could see photos he was going to post from a family wedding. I have yet to see those pictures… but in the meantime, I’ve gained about 300 friends, become a fan of numerous brands, and used the site as a quick bulletin board to get  information about everything from school and church events to real-time updates about breaking news happening in my neighborhood.

When I first started HapaMama, I publicized my posts on Facebook, and wondered why more people weren’t reading them. Eventually, I realized that’s because on Facebook, only people you already know will see your posts. If you’re lucky, your friends might share it on their wall, which may amplify your voice to a couple hundred of their friends.

On Twitter, all your posts are public. And if you know how to use common hashtags for your topic stream, you can make your tweets even more easy to find.

Have you ever gotten Facebook friend requests from people you barely know — or have never met? Yeah, I delete those. Even though I put little stock in “privacy” settings on any website, Facebook to me still feels like a community space. I wouldn’t staple flyers all over the neighborhood telephone poles to invite people to a barbecue in my backyard, and I wouldn’t accept a friend request from a person I don’t know. In over five years on Facebook, I have less than 300 friends. And I’m fine with that.

Twitter, on the other hand, is like a rally in the public square. The more the merrier. Twitter isn’t based on real-life connection but shared interests. I started following people who were involved in Asian American or other ethnic community advocacy, food bloggers who share the same taste as me, and Mom bloggers who have the similar sensibilities about child-rearing as me. On Facebook, I get wary of being the Angry Asian Woman who is always posting links to articles about stereotypes and politics and such, but on Twitter, those kind of posts actually prompt lively discussion — often with people I’ve never met or have only stalked from afar. In little over a year, I’ve amassed over 1100 followers on Twitter.

Okay, this may seem weird to many readers, but some of my favorite friends I’ve met on Twitter. It’s a little like on-line dating (not that I know anything about that since I’ve been married longer than the Internet has been around!), as opposed to going to cocktail party. There’s no polite small talk, no awkward pauses, no vacation photos or funny kitten memes. On Twitter, we can jump right into talking about things we’re interested in — be it artisanal foods or trashing Asian American stereotypes. In fact, I think that’s where I got to know TaiwaneseAmerican.org founder Ho Chie Tsai, who mentioned me in this article.

Want to read more about how Twitter is changing the world? Check out Catherine Shu’s article Connections in 140 characters or fewer in the Taipei Times. And want to see for yourself what Twitter’s all about? Follow my personal tweets @HapaMamaGrace and my BlogHer tweets @BlogHerCultures.