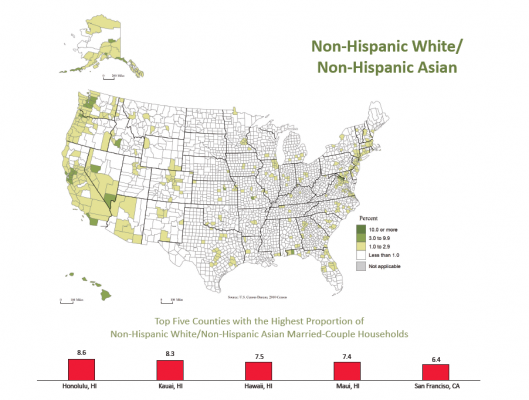 Judging by the dark green segment on the map, San Francisco seems to encompass the entire Bay Area. The report also states that the areas with the highest rates of white/Asian unions tend to be the areas which have the highest Asian populations. White/Asian couples make up nearly 14% of mixed-race marriages in the United States. The report doesn’t address mixed marriages between Asians and other non-white races, although there is a map of interracial marriages in which one spouse reported multiple races or both spouses reported multiple races. Marriages with one or two multiracial spouses tended to correlate to areas with large Asian or American Indian populations.

Business Insider has an easy-to-read breakdown of all the Census data at Geography of Interracial Marriage.