I’m trying to cut down on all the frenzied rigamarole of the holiday season. I let my husband decorate the tree, I didn’t volunteer to bring any graham crackers for the first grade gingerbread houses, and I tried to cut down on the number of presents this year. But one self-imposed ritual I refuse to give up is the photo Christmas card.

Our family has sent a photo card and letter out every year since our first son was born. After all, I don’t want them to miss out on the details of who lost his first tooth (the six-year old) and who learned to write his name without any prompting (the three-year old) this year. But the piece de resistance is the photo. In years past, I’ve done everything from dressing us up in cable-knit sweaters and posing at the mall photo studio to pointing-and-shooting a snapshot of a toddler in his footed pajamas. It’s gotten a little more difficult, as my kids — not to mention my husband — are growing a bit tired of posing. I may be a photo enthusiast, my models are less than enthusiastic.

Blame it on genetics. My people are known for clicking anything in sight on vacation. And with an engineer dad, I really don’t stand a chance against anything shiny and digital with lots of little buttons to press. I pore over thick, glossy camera catalogs the way other people stare at well, you know, other thick glossy publications.

I generally think that Christmas card photos need to be taken before the autumnal equinox, when there’s no chance of rain in California and the color of the light has that warm, golden glow. But this year, we didn’t get our act together until well after Halloween. Although the weather cooperated, with sunny skies and trees full of colored leaves, getting my kids to cooperate was a different story. And it doesn’t help that my husband thinks it’s hilarious to re-enact the Jim Carey’s ski lodge fantasy from Dumb and Dumber every time we dress up in sweaters. 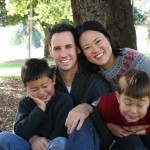 We headed out to a quaint historic area with our friends Leena and Omar and their two sons. With two digital SLRs and an afternoon to burn, we were confident about getting a perfect picture. What we ended up with was a mish mash of closed eyes, pouting, and generally un-brotherly behavior.

By the beginning of December, I was searching my hard drives in search of a photo — any photo — of our family, or just the boys, and was ready to go buy a box of Christmas cards at Target. But one afternoon, when the kids were aimlessly bouncing around the house, I asked them if they wanted to put on their sweaters and take our old ride-on fire engine for a spin. The fire engine was a gift from the grandparents two Christmases ago, and while I’d always plannned to take some photos with it, I just never got around to it. The shiny red truck proved to be just the distraction the boys needed. We rode down the street and posed in a shady area covered with fall leaves. 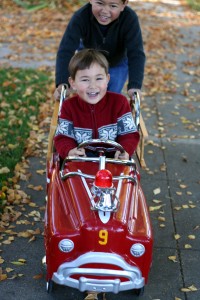 But here we were halfway down a very long street, and my three-year old announces that he’s tired and starts having a tantrum on the sidewalk. The afternoon has gone so well, and I’m desperate for a way to salvage the moment. For once, my mommy ingenuity kicks in, and I ask my older son to push his brother back home. And they were off! Why didn’t I think of this earlier? I ran to catch up with them, and then ran backwards the rest of the way home, trying not to get run over. But it was all worth it, when I got this shot — a genuine portrait of two brothers having fun. With each other.

Of course, there’s a catch. because the older boy’s eyes are so close to the edge of the frame, most card-making sites cropped off most of his head, rendering it unusable for the actual Christmas card. But I had a backup from the other photos we took that day, and this will be my holiday greeting to my lovely HapaMama readers.

Merry Christmas and Peace Be With You!