One year ago, our family’s Pokemon collection consisted of a few plastic figurines and a handful of cards — all things Big Brother brought home from his Chinese school class. His teacher used the trinkets as rewards for learning characters or finishing homework.

But the cards and toys were just random stuff to my son. At the time, his mind was on Legos and Star Wars.

Then, all of a sudden it hit. Pokemon fever spread through our elementary school.

Why now? This franchise has been around for fifteen years, and my kids never showed any interest. Well, what’s old is new again… 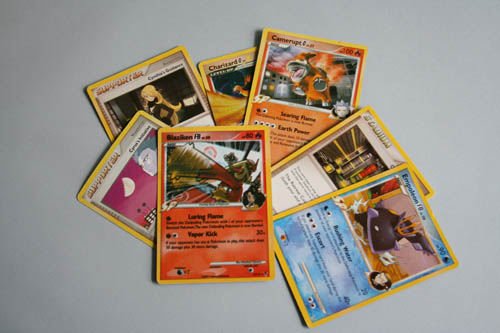 The handful of Pokemon cards that started the craze

I think it all started with a random act of kindness. One of my kids’ friends had a large collection of Pokemon trading cards that he wasn’t interested in anymore. During one playdate, this boy parcelled out his cards among half a dozen friends. Maybe it was the mob mentality. Maybe it’s because now that they are in third grade, they all can read proficiently — understanding the codes on the cards and ordering Pokemon manuals from the Scholastic book orders — and are actually trying to play the game, istead of just admiring the pictures.

Piggy banks and red envelopes have been emptied and all our liquid assets have now been invested in Pokemon cards, tins, and books. Both Big Brother and Little Brother now own over 100 cards each. Little Brother informs me that all the cool kids are watching the new Pokemon Black and White on the Cartoon Network (Yes, I know, we don’t get that channel!). Big Brother has even found a website where you can upload photos of yourself or your favorite toy and make your own Pokemon trading cards (HapaMama has not received any compensation from this website).

This afternoon, we finally went out and bought clear plastic sleeves to organize the hundreds of cards into binders. For hours, I kid you not, my house was quiet. The two boys were busy at work, cards arrayed on the floor, sorted into groups by color, element, family (and however else Pokemons are organized).

Do your kids collect Pokemon cards? What’s the next new elementary school fad?