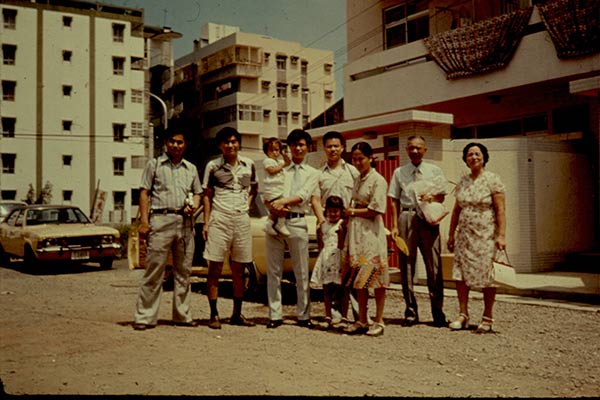 In just a few days, my family will be boarding a plane for Taiwan. One of the reasons I really wanted to make this journey now, is that I’d like my boys to be able to see the island while they still have the eyes of children. I went to Taiwan for the first time when I was barely six years old. At the time, only a decade had passed since my parents left their homeland to become graduate students in the middle of the United States.

Look at what Taipei was like in the late 1970s. The photo above shows my grandparents’ apartment building, which at the time was located on the edge of the city. I don’t remember it being such a developing country, but look at the gravel roads and the barren street scape. On the ground floor of the building was a beauty salon, where I got my first perm and came out looking like Shirley Temple. My memories from that first visit to Taiwan are more like impressions, a series of vignettes of things that stood out for how different they were than in our Midwestern suburb: the crowded buses, the squat toilets, the rooms full of aunts and uncles whose names I did not know, but who all looked vaguely like my mother and father. I stayed there all summer with my mother and my one-year-old brother. I’m glad we spent an extended time there because that trip turned out to be my only childhood visit to my family’s homeland.

As the years went by, I still remembered mangoes as big as my head and scratchy new ankle socks. Sometimes I’d catch a whiff of an odor — incense or sewage — triggering some primal memory of walking down the street in Taipei. In my mind, Taiwan was frozen in time, an un-airconditioned tropical island where my relatives were dependent on us to bring suitcases full of Revlon lipsticks and Camel cigarettes.

We never flew back to Taiwan again as a whole family. It would be nearly 25 years before I’d visit again. My husband and I boarded an EVA Airlines flight just a month after 9/11. While I knew that the island had modernized by leaps and bounds since my childhood, I was unprepared for the clash between my memory of Taiwan in the 1970s and the reality of Taiwan in 2001.The apartment building on a quiet side street had become surrounded by a bustling shopping district. The streets had been paved over and all those empty lots had been filled in with high rises. My relatives didn’t need me to haul American goods on the plane, because there were boutiques selling Ralph Lauren clothing and Clinique cosmetics right around the corner.

I’ve been trying to prepare my boys for what they will see and eat and experience, but I feel like my meager stories and explanations don’t even come close to capturing what it’s like to be immersed in another place. When we go to Taiwan, my kids will be missing a week of school, on independent study. I can’t wait for what they’ll learn.