I don’t know about you, but I’m still reeling from the elections. Especially as news comes in about the role of Asian Americans in this campaign season. Six new API members of Congress will be sworn in next January, in addition to eight returning representatives. But the one that caught my eye this election season is Tammy Duckworth, an incoming freshman from Illinois. I first saw Tammy at the Democratic National Convention in September, where she strode onto the stage at the Time Warner Arena on two curved metal prosthetic legs and genuine confidence. Reading up during the campaign season, I learned that Tammy is hapa, the daughter of a Thai-Chinese mother and a white father. But that’s only the icing on the cake. 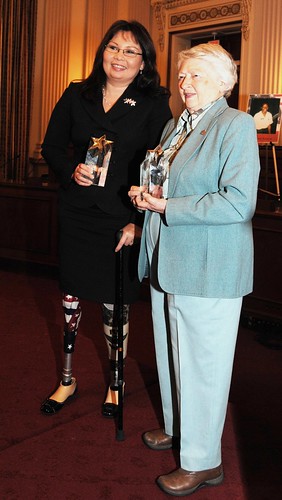 Tammy Duckworth’s story captured my attention because of how quintessentially American it is, on so many levels. Yet her life is also a thumb to the nose of many preconceptions of what it means to be an American, or rather an Asian American. Which in a way, makes it all the more American. But back to Tammy Duckworth… After graduating from the University of Hawaii and earning a Master’s degree from George Washington University, she joined the army reserves. In fact, military service is a tradition in her father’s side of the family going back all the way to the Revolutionary War. During the Iraq War, she was one of the first women to fly a Blackhawk helicopter. While I listened with professional cynicism to many of the Tales of Middle America trotted out on stage at the convention, I struggled to fight back tears as Duckworth told her life story. Here’s an excerpt of her speech:

Dad’s work took us all over the world until he lost his job. It was a tough time. We used up our savings, moved into a studio apartment. But our family did the responsible thing and rolled up our sleeves. Mom took in sewing.

My 55-year-old dad tried to find work. But at 15, I was the only one with a job—after school, for minimum wage. Thank God for the food stamps, public education and Pell grants that helped me finish high school and college.

Perhaps her story hit a little closer to home, as here was a woman close in age and ethnicity to myself. Or perhaps it was the straightforward dignity with which she recounted the day she lost her limbs in combat. No pity, no shame, no dramatics.

On November 12th, 2004, I was co-piloting my Blackhawk north of Baghdad when we started taking enemy fire. A rocket-propelled grenade hit our helicopter, exploding in my lap, ripping off one leg, crushing the other and tearing my right arm apart. But I kept trying to fly until I passed out. In that moment, my survival and the survival of my entire crew depended on all of us pulling together. And even though they were wounded themselves and insurgents were nearby, they refused to leave a fallen comrade behind. Their heroism is why I’m alive today.

The part of the story I didn’t learn until recently was that before she was wounded, Duckworth was working with Rotary International to provide wheelchairs for the disabled in Iraq.

But my favorite Tammy quote of all?

“They didn’t bury me in Iraq, and they damn well are not going to bury me now.”

Capitol Hill is becoming more diverse overall, with a record 28 women of color serving in the House. For more, check out my latest post on BlogHer.