Who here was raised on homemade Chinese food every night?

Who here prepares homemade Chinese for for their family every night?

Uh huh. I thought so. 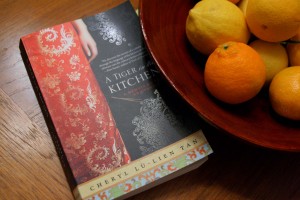 "Tiger in the Kitchen" by Cheryl Lu-Lien Tan

There’s hope for you yet. That’s the premise of Cheryl Lu-Lien Tan’s new food memoir “Tiger in the Kitchen”. A former fashion reporter for the Wall Street Journal, Tan subsisted on salad lunches (dressing on the side!) until she found herself laid-off in as a result of newspaper downsizing. Tan makes lemonade, by spending a year travelling back and forth to Singapore — where she learns the secrets of Teochew Chinese cooking from her aunties and grandmother. Check the new online magazine, Talking Writing , this spring for my full review of the book.  Bay Area folks can also catch Tan’s San Francisco appearance.

The book has gotten me thinking about how I…

And about how my own children…

Something’s gotta change. And I’ve got a few ideas. Stay tuned for more, coming soon on…

What are your food memories and traditions?

How are you passing them on to your children?

Could you use a little help?