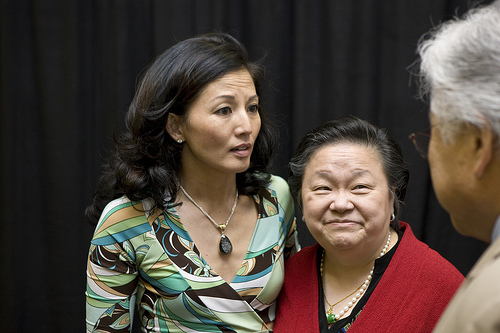 We’re less than 90 days away from the 2012 Presidential Election. And guess what? Your vote counts, this year more than ever.

Earlier this summer, the Pew Research Center reported that Asians are the fastest growing racial demographic in the United States. And because more Asians are settling in Nevada, Virginia, North Carolina and Florida — key swing states– we could be playing a big role in affecting who wins November’s Presidential Election. In July, I wrote the post How Asian Voters Could Swing the Election for BlogHer.

I’ve always voting seriously, as have other members of my family. But not all Asians have the same level of awareness. Statistics show that Asians often don’t get information about election. At the America Healing conference in April, Donna Brazile of the Democratic National Party said that less than 25% of Asians say they receive information about elections. PBS’s Hari Sreenivasan recently reported an excellent piece Overlooked Asian American Voters which focused on the Asian American community in Las Vegas. Here are some surprising bits of information from the report:

But back to Donna Brazile’s presentation last April, she said, “One thing I can tell you about communities of color, if you say the election is X day, they will show up.”

So, I know you are busy with family, careers, volunteer work and all, but I’m asking you now to make sure you are registered to vote. You can even do it online. In California, the deadline to register for the November election is October 22. In other states, it’s even earlier. Talk to your friends and family about registering to vote. Make sure your driver’s license or other forms of photo ID are up-to-date. Many states have new voter ID laws that may make it tougher to get into the polls. Why take a chance that your voice won’t be heard?

For more Asian American voting information, check out these resources: