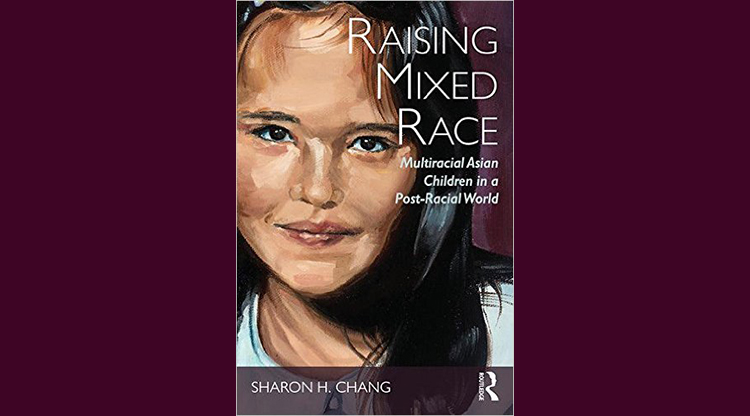 I’ve been reading a new book by Sharon H. Chang called Raising Mixed Race. You might remember Sharon, a Seattle-based writer and scholar, from her guest post A Multiracial Asian Mom Wonders How Her Son Will See Himself (Routledge 2015). With chapter titles that are analogies to home construction (Foundation, Framing, Wiring, etc.), the book aims to get to the historical ideas behind the way we talk about race, including the concept of mixed race identity. I was especially interested because the research focuses specifically on Asian multiracials. Recently, I had a chance to interview Sharon about her work. Read on…

HapaMama: First of all, tell us a little bit about yourself, how the idea for Raising Mixed Race: Multiracial Asian Children in a Post-Racial World

came about and the process of researching and writing it.

Sharon H. Chang: I’ve worked with families and children for over a decade in various capacities: as a teacher, parent educator, administrator, school owner, etc. I hold a Master’s degree in Human Development with an Early Childhood Specialization and Raising Mixed Race actually grew out of my Master’s thesis. At the time I had just had my son and was struggling to find resources that would support our mixed race family. Frustrated beyond belief (particularly since I thought things would have changed by now) I finally decided to head into the field and conduct research myself. I interviewed 68 parents of 75 young multiracial Asian children around questions of race, racism and identity. I then compiled and analyzed those interviews, about 800 pages of transcripts, while simultaneously researching critical mixed race studies. Several years later I am at last thrilled to debut the book we are about to see today.

HM: Something I hear all too often is that “race doesn’t matter anymore”. And I’ve even heard this from parents of mixed race children. Your discussion about mixed race Asian identities is really based on analyzing and deconstructing the way we see race, ethnicity and culture (and I’ve also written before about how those are not interchangeable terms). It’s a major theme of your book… could you give a brief explanation or introduction about how the background of the concept of race and how that influences society and the way society sees us, even if we don’t think matters?

SHC: Race absolutely still matters and racism persists in every sector of society. We can easily see evidence of these realities every day in the news, on social media, in film, television, publishing, academia, the workplace, medicine, government, politics, law, etc. Proclaiming “race doesn’t matter anymore” is willfully ignorant, colorblind, avoidant, and worse – in being complicit – perpetuates racism itself through inaction. To make the point how powerfully shaping racial reality is: The finely-tuned concept of race alone (i.e. belief that human beings can be organized into a handful of hierarchically organized groups based on the way they look) has not changed in centuries. Elite white male thinkers fully congealed value-laden racial categories by the late 1700s which are still the very same categories we use today. This way of thinking has been infused into the fiber of society; the words we use; the way we interact with each other; even our Constitution. Every time we check a race box on a form, every time we read a report where people are filed into races (e.g. Pew Research), every time we watch a news anchor talk about Black Lives Matter protestors – we are living the reality of the racist foundation this country was built on. Nobody is immune or escapes that history that continues to shape us all today.

HM: It seems to be an easy assumption, especially for parents of Asian-white children, to think that their kids’ experiences will be basically the same as their white counterparts. But there are some dangers in that belief, aren’t there?

SC: It’s not that there are some dangers in that belief – it’s that that the belief is entirely false. Though Asian-whites of course may be afforded some privileges based on their particular mix and appearance and have socioeconomic access to wealth and education, there was still nothing in my research indicating Asian-whites have the same experiences as whites. In fact, quite the opposite. Of 75 multiracial Asian children represented in my book mostly under the age of 6 who were predominantly Asian-white – at least half had already experienced racism as racialized people of color. This number is likely much higher given it’s based on parent reports and parents demonstrated repeatedly that they did not like to see their children’s real racial experiences. Further these children were having the very unique challenge of facing racism not predominantly outside the home, but within the home. Sadly a lot of the discrimination they contended with was by white family members. There is a very particularly painful toll in having to deal with discrimination coming from people you love and hold valued relationships with. Lastly, compounding everything,these kids were often left alone in their experiences. Because adults frequently bought into the belief Asian-white children were post-racially privileged, parents generally did not talk to their kids about race and did not equip them to deal with discrimination or to become critically resistant and engaged citizens.

HM: Finally, it can seem a bit depressing or even hopeless, when we really start poking around the history of race in the United States or even current events. What parting words do you have for parents who are currently raising mixed race children?

SHC: Don’t lose hope! We can make a change through ourselves and our parenting. It’s easy to get overwhelmed, paralyzed by despair, and then end up doing nothing. But doing nothing is part of the problem and we have to make a commitment to do better. You know I realized halfway through writing this book that if I ended without offering some guidance for action, folks would feel, exactly as you say, depressed and hopeless. And that was entirely not my point. My primary goal was to positively influence the lives of young mixed race Asian children. And to do that I wanted to galvanize, inspire and energize critical adults around those children to new ideas and awareness. So. The last chapter of this book (Chapter 8 Final Inspection: Point of Intervention) is all about suggestions for steps we can take. And particularly important here acknowledging that everybody has a different entry point into taking action. I offer suggestions at micro, meso and macro levels from empowering ourselves to transform our thinking, to being intentional about the materials our children interact with, to getting involved in organizations and activism. You won’t feel hopeless after you read this book. Promise!

Follow the Raising Mixed Race Facebook page and join in the online release party on Friday December 11 for a chance to win signed copies of the book or other works focusing on Asian or mixed race themes. You can also follow Sharon’s work at her blog, Multiracial Asian Families.